My Dearest Readers 🙂 I am proud to announce that I have been chosen to be one of the official Mushroom Mania bloggers this year! The campaign is run by Australian Mushroom Growers and every year in July a handful of bloggers from each state will review mushroom dishes from cafes and restaurants of their choice. Check out their reviews here ~

I am a huge fan of mushrooms! Love some herbed mushrooms for breakfast, in my stir-fry for lunch and mushroom sauce over my steaks for dinner 🙂 So I was thrilled to be part of Mushroom Mania and be able to share with you my favourite mushrooms dishes. 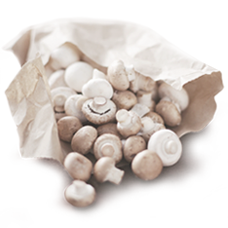 I always knew mushrooms were good for me, but I didn’t realise that it was actually a superfood with so many benefits! Here are some interesting health facts:
– Mushrooms are a superfood – low in kilojules, high in bioactive compounds, antioxidants, nutrient-rich, flavour-rich, convenient and affordable.
– Mushrooms are not a plant and neither a fruit or vegetable, they have their own biological kingdom
– Mushrooms have a natural savoury flavour, which acts as a flavour enhancer like salt or MSG
– A serve of mushrooms provide over 20% of the recommended daily intake of Vitamin B and also contains vitamin B12
– You don’t need to sit in the sun to get vitamin D because Mushrooms naturally contain vitamin D ~
– Research suggest women who eat 10g mushrooms or more daily has a 50-69% lower risk of getting breast cancer compared to those who don’t
– Last but not least it’s very affordable 100 grams (three button mushrooms or one flat mushroom) is less than $1 a serve
For more information please visit the Power of Mushroom website. 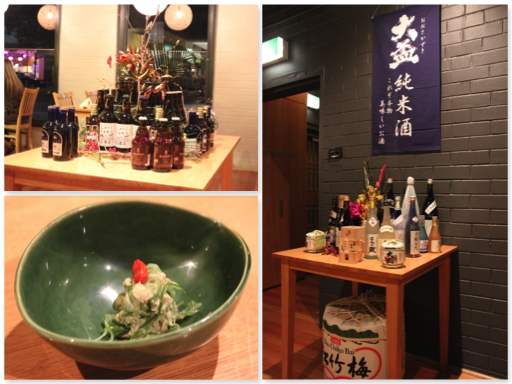 I had so many ideas about the mushroom dishes but realised most of them were brunch places. Mr Bao wanted something a little out of the ordinary and suggested maybe we try looking for mushrooms dishes used in Japanese cuisine because many mushrooms originated from Japan such as the Shiitake, Enoki and Shimeiji 😀 Awesome idea! I immediately went through the menu of our favourite Japanese restaurant Komeyui, unfortunately, I wasn’t able to find any dishes where ‘mushrooms’ was the hero ingredient. But I didn’t want to give up…so I shamelessly emailed Kuma the executive chef and owner of Komeyui and told him about Mushroom Mania and whether he would like to create some mushroom dishes ~ Thankfully, he immediately agreed! YAY! 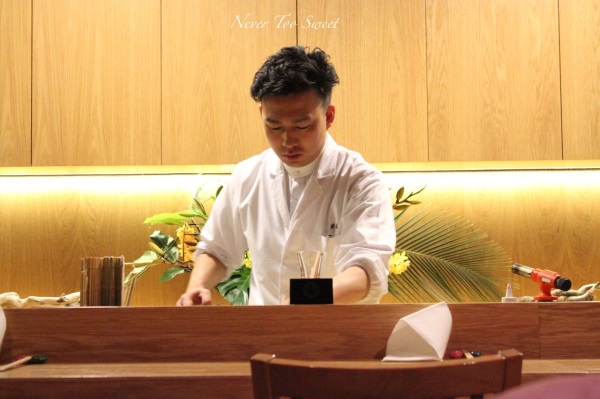 A week later, we were back at Komeyui and ready to try the special mushroom dishes 😀 Mr Bao was probably more excited because Japanese is definitely his favourite cuisine. 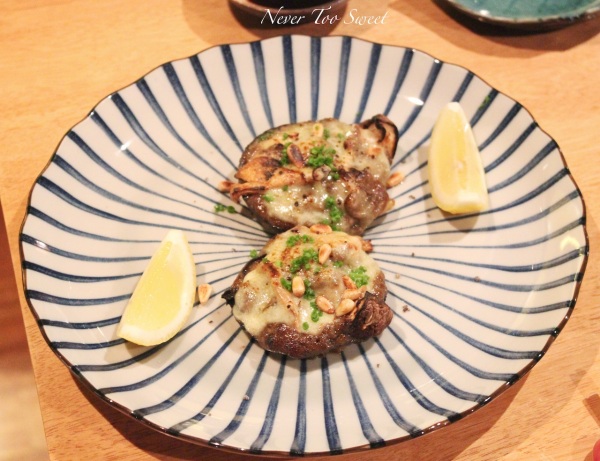 Wasting no time, the first mushroom dish was immediately brought to our table and it smelt so good. To my surprise it was a French inspired dish, a button mushroom gratin. It was a button mushroom filled with a duxelles (minced mixture of mushroom), an oyster topped with cheese and finished with pine nuts which gave it a great crunch. The dish had so much flavour and the duxelles just took the mushroom flavour to a whole new level! A highly recommended dish if you like mushrooms!

The dish had so much flavour and the duxelles just took the mushroom flavour to a whole new level! A highly recommended dish if you like mushrooms!

Next was a lighter tasting dish, broiling seasonal mushrooms and clams which had oyster, enoki, shiitake and shimeiji mushrooms. Kuma told us he thinks this is the best way to eat mushrooms because usually mushrooms smell really great but some of that flavour is lost during the cooking process. But because the mushrooms are broiled it retains all the flavour, which I agree and the clams also gave it an additional sweetness. 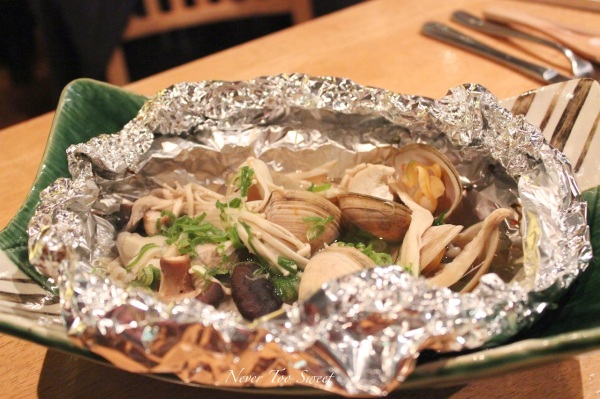 Mr Bao and I were fighting over the broth like liquid left behind because we think that’s the best part ~ I would recommend having this dish first and before having the gratin as it’s strong flavour may overpower this dish a little.

We only expected 2 dishes but Kuma also made us some King Oyster Mushroom Nigiri that was lightly seared with a blow torch. The oyster mushrooms can be quite bland in flavour, to add more flavour the sushi rice was actually seasoned with seaweed. I just wished more nigiri used seasoned rice 😀 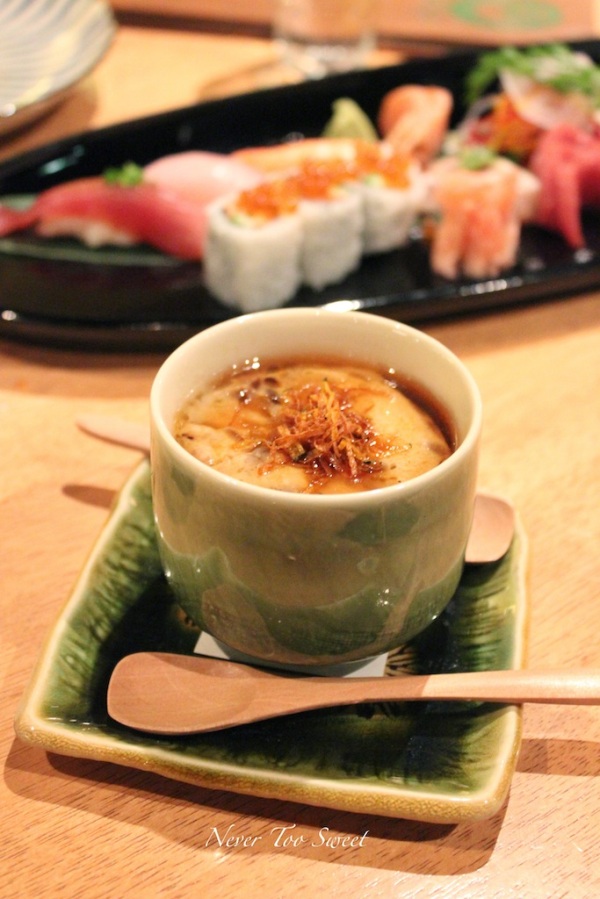 We also ordered some non-shroom dishes, including this Chawan Mushi a savoury steamed egg custard with pieces of prawn, chicken and also a soft mochi like dumpling hidden inside 🙂 One of my favourite Japanese dishes!

Ohhh surprisingly found mushrooms in the Chawan Mushi as well 🙂 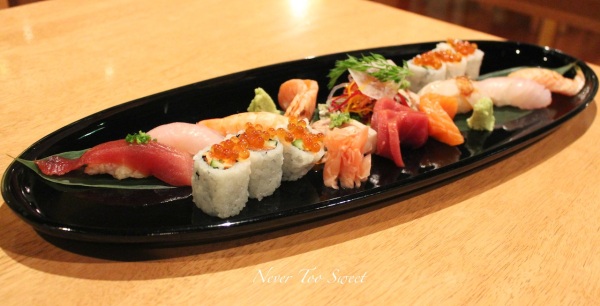 Mr Bao loves his sushi, so he ordered the Assorted sushi and sashimi platter for us…but he probably ate more than half 😦 Not fair! 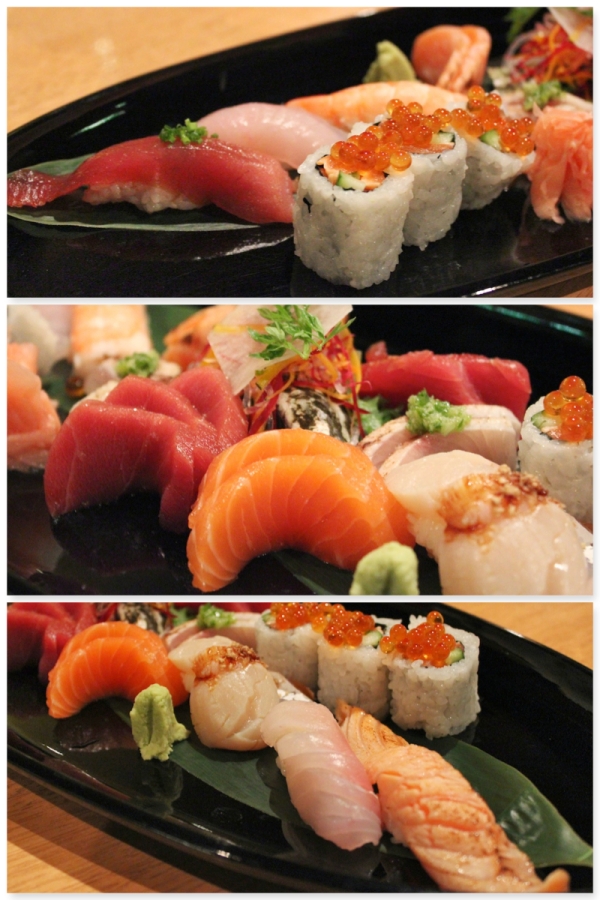 The platter has a good variety of sushi and sashimi, with salmon, kingfish, tuna, scallop, salmon roll and ebi prawn. My pick would definitely be the seared salmon and the salmon roll with salmon roe on top. I love it when the roe pops and the salty liquid explode in my mouth hehe. Mr Bao really liked the tuna sashimi with a fatty oil layer which melts in his mouth ~

I had serious cravings for soft shell crab so we got a serve ~ I love how easy it is to eat without having to break any teeth trying to crack the shell. It was crispy and crunchy but not the least oily 🙂

Hiding behind the soft shell crab! I found another MUSHROOM 😀 I’m actually not sure what mushroom this is? Button? Swiss Brown? 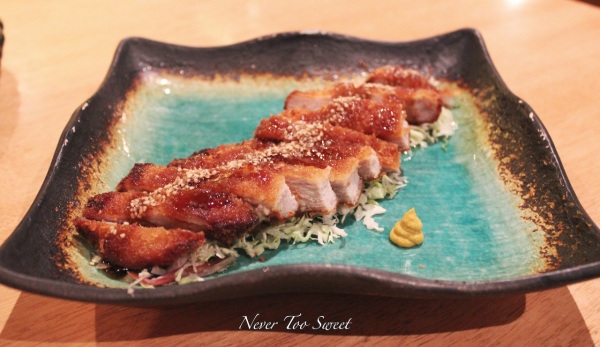 Still had some room for some more food 😛 so we tried the Berkshire Pork Tonkatsu another deep fried dish. I loved the thin batter coating the pork, even though it was deep fried it wasn’t dry and still tender and succulent inside. We would have liked a little more mustard but other than that it was great ~ 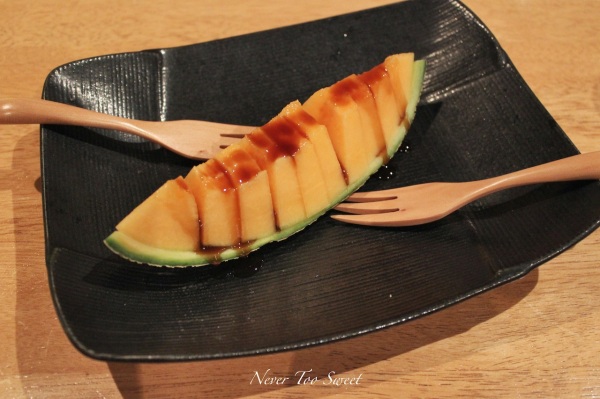 For once I was defeated 😛 I couldn’t have a proper dessert but we did have the complimentary honey dew with brown sugar syrup so that was a nice sweet treat to end our wonderful mushroom themed meal.

Even though two mushroom dishes were specially made for us ~ Kuma has now placed it on the menu and you too can try these dishes!

There’s also a competition running on the Mushroom Mania website 😀

Hope you’ll be enjoying some mushroom dishes too 😀

This is a sponsored post by Australia Mushroom Growers, but meal was paid for individually at Komeyui all opinions are honest and based on time of visit.

Your comments are my encouragement :) Cancel reply

All meals and products are paid for myself unless otherwise stated. Reviews and opinions are only based on my personal experience. © Copyright Daisy Wong 2012 all rights reserved http://nevertoosweetforme.com.